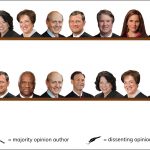 Last week in Garland v. Dai and Garland v. Alcaraz-Enriquez, the Supreme Court held that reviewing courts cannot treat an asylum seeker’s testimony as credible unless the agency first finds the applicant credible. The unanimous opinion, penned by Justice Neil Gorsuch, rejected the contrary approach of the U.S. Court of Appeals for the 9th Circuit.

In argument and briefing, the government contended that the 9th Circuit rule — which took asylum seekers’ testimony as credible when faced with agency silence on credibility — violated standards of federal court review. The asylum seekers, meanwhile, argued that the rule properly flowed from the Chenery doctrine, which requires federal courts to review an agency’s reasons as given rather than substituting their own rationales.

In asylum cases, the immigration judge is responsible for making credibility determinations as trier-of-fact. The statute that covers asylum applications — Section 1158 of Title 8 — specifies that “if no adverse credibility determination is explicitly made” by the immigration judge, “the applicant or witness shall have a rebuttable presumption of credibility on appeal” before the Board of Immigration Appeals. But the statute doesn’t say what the federal courts should do if the BIA fails to expressly find the presumption rebutted.

In the cases of both Ming Dai and Cesar Alcaraz-Enriquez, the immigration judge didn’t (explicitly) make a credibility finding, and the BIA didn’t (explicitly) apply the presumption or deem it rebutted. Accordingly, the 9th Circuit treated the asylum seekers’ testimony as credible when conducting its own review.

The unanimous Supreme Court rejected that approach. “Nothing in the [Immigration and Nationality Act] contemplates anything like the embellishment the Ninth Circuit has adopted,” Gorsuch wrote. “And it is long since settled that a reviewing court is ‘generally not free to impose’ additional judge-made procedural requirements on agencies that Congress has not prescribed and the Constitution does not compel.”

Gorsuch agreed with the government that the rule violates the standard of review, under which courts accept agency factual determinations unless “any reasonable adjudicator would be compelled to conclude to the contrary.” In giving conclusive weight to testimony that contradicts an agency finding, “the Ninth Circuit’s rule mistakenly flips this standard on its head.”

He also explained that the lower court erred “by treating credibility as dispositive of both persuasiveness and legal sufficiency.” Because asylum seekers carry the burden to persuade the agency and provide sufficient evidence, the BIA could have properly ruled against them even “setting aside [their] credibility.”

Gorsuch is well-known for his skepticism of agency statutory interpretations and his strong disapproval of the Chevron deference framework. But in considering agency adjudication in this factual context, he afforded wide latitude to the BIA. He gave a nod to the Chenery doctrine’s disallowance of “ex post rationales” by courts, but continued: “[N]one of that means the BIA must follow a particular formula or incant ‘magic words’ like ‘incredible’ or ‘rebutted’ to overcome the INA’s presumption of credibility on appeal.”

It falls upon the reviewing court, rather, to “consider the possibility that the BIA implicitly found the presumption of credibility rebutted.” Gorsuch explicitly instructed the 9th Circuit to do just that when addressing both Dai and Alcaraz-Enriquez’s cases on remand.